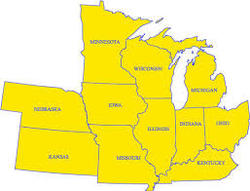 Central Region is of great significance to the Sorority as it is where the inception of the idea for our great sisterhood was born through the efforts of the courageous and illustrious 7 educators from Indianapolis, Indiana.

Central Region was established in 1925 and organized in 1940 by Sorors Homer Woods of Chicago, Illinois, and Ruth Armstrong of St. Louis, Missouri. The first annual Central Regional Conference of Sigma Gamma Rho Sorority, Inc., met on the campus of the University of Illinois, Carbondale, Illinois, May 10-12, 1940, with Psi Sigma Chapter of Kansas City, Missouri serving as hostess. Today, Central Region comprises 43 Graduate Chapters and 56 Undergraduate Chapters.

Central Region has a rich history in that the Sorority’s Pledge, National Hymn, Slogan, Official Badge, Coat of Arms, Sorority Flower, and the Sorority Colors were all created and originated from Sorors within the Central Region. The Rhoer Pin, Rhoer Hymn and Official Flower were designed, written and selected respectively by members from Central Region.